Orange monkeys and purple mangoes. Green mountains and red flamboyan trees. That is what I’ll remember about my trip through Guinea’s interior. That is what made me fall in love with Guinea.

If you’ve been following my blog, you may be wondering how my frustration with Guinea turned into love. Okay, let’s start from the beginning.

Kankan is the second-largest city in Guinea, located in the Upper Guinea region (Haute Guinée), about 640 kilometers from Conakry. On May 3rd, I set out for Kankan with my partner and the Regional English Language Officer (RELO) for West Africa to conduct the first of a series of workshops for English teachers, organized by the Guinean English Language Teachers’ Association (GELTA) and the English Language Fellow in Guinea (hey, that’s me!).

The road to Kankan is the ONLY road through Guinea’s interior. Despite this fact, it is not well maintained at all. In fact, only some stretches of the road are paved, and the paved parts have so many bumps and potholes that I actually preferred the dirt roads. We had to drive extremely slowly, which is why it took us two days to go the 640 km. We got to do it in an air-conditioned Embassy vehicle. Most Guineans do the trip in hot, crowded taxis and buses whose shocks have been completely worn down.

I’ve traveled to nearly 30 different countries, and I have to say that Guinea is the most beautiful place I’ve ever seen. Going from Conakry to Kankan, we passed through the dense, palm tree-filled vegetation of Maritime Guinea, then through the green mountainous region (the “Fouta Djallon, as it’s called), and then through the hot, arid region of Haute Guinée to Kankan, full of cacti, bats, and termite mounds.

We passed over the Niger River, the meandering body of water that is sourced in Haute Guinée and serves as the main river in West Africa.

Everywhere we went, mango trees were exploding with fruit and were so plentiful (due to the current mango season) that several markets we saw were selling nothing but mangoes. 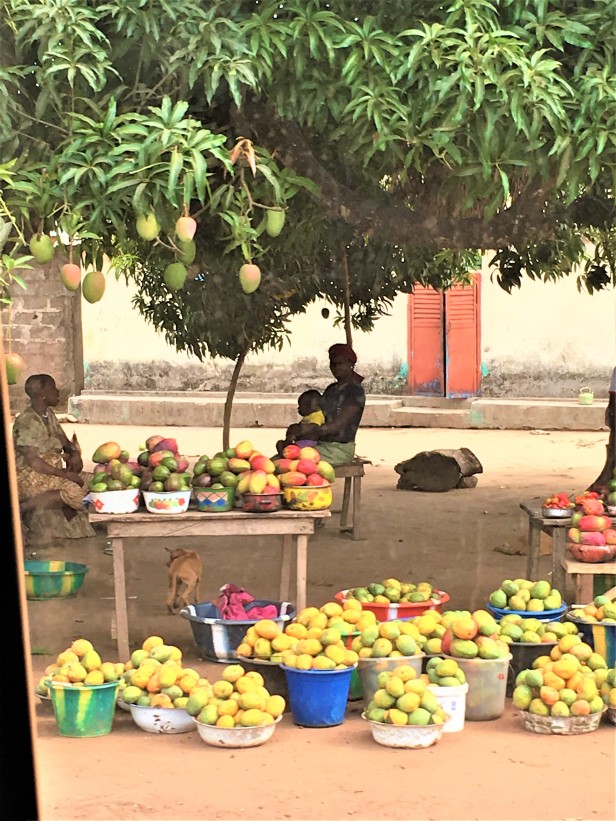 Once we reached Haute Guinée, the mangoes got bigger and… purple! That’s right: purple mangoes, but only on the outside. The insides are always bright orange. We saw some bands of monkeys run across the road in front of us. They were also bright orange.

The dry season officially ended during our trip. Our first day on the road, Haute Guinée had its first rain of the season. Apparently, after the first rain of the season, all of the termite larvae – which incubate underground during the dry season – all hatch and fly around, filling the air with flying baby termites. They have wings for only one day, after which they drop off and the termites continue their lives on land. We got to witness this first-hand, as evidenced by our windshield the day after the rain:

The three-day workshop in Kankan went very well. It was held at the Julius Nyerere University of Kankan, and was administered by the President of the American Corner there (American Corners are U.S. Embassy-sponsored libraries in Guinea). There were 32 participants in the workshop, 30 of which were public-school teachers and 2 were university teachers from Kankan. The university teachers were rather arrogant and tried to challenge me every chance they got, but I was told that I handled them well and in a professional manner. Guinean men are not accustomed to being trained or told what to do by women – especially foreign women. 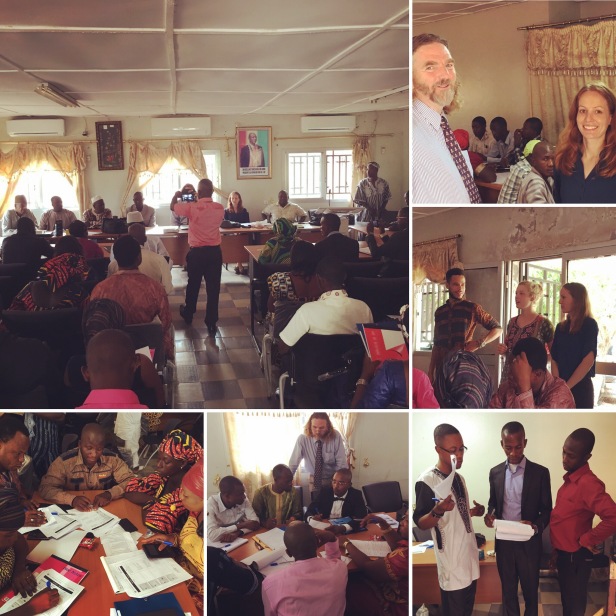 That weekend was a whirlwind for me. In addition to the workshop, we hung out with the university staff and Peace Corps volunteers from the region who had come to the city for a fish festival. I left Kankan with new friends, and a heat rash! It was about 40° Celsius (over 100° F) in the conference room where we had the workshop, and the air conditioner was never on because the electricity was never on.

We left Kankan and set out on the same road back to Mamou, which we had passed on our way to Kankan. Mamou is the main hub in Guinea: from there, one can go southeast to the forest region, east to Kankan, or west to Conakry. Mamou is in the Fouta, the mountains, where everything is green and the bright red flamboyan trees were in full bloom. The colors were mesmerizing. 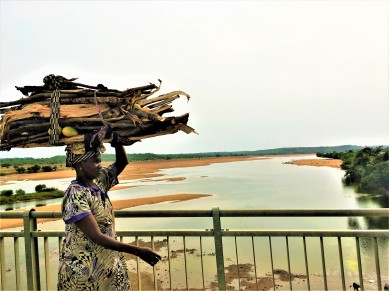 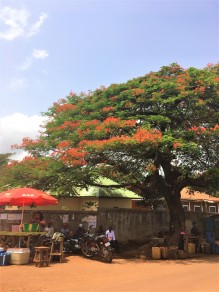 Mamou was much cooler than Kankan; I even had to wear a jacket when I went outside in the evenings. This made for a much more pleasant three-day workshop considering there was no electricity at all in the building. The workshop was held at FIERE (I forget what that stands for), which is a center for girls’ education. One of the 30 participants was my chauffeur for the weekend; and by that, I mean I got to tote my backpack and boxes of materials around on the back of his motorbike all weekend. Guinean-style!

The day before the workshop started, I went on a day trip, about an hour and ten minutes away from Mamou proper, out to a small town called Dalaba, up in the Fouta. I went to visit Jeune Espoir, an NGO, whose founder and Executive Director is an alumnus of the Mandela Washington Fellowship, a program of the State Department’s YALI operation (Young African Leaders’ Initiative). I had been put in contact with the Executive Director of Jeune Espoir by the Cultural Affairs Officer of the U.S. Embassy when I talked to him about another NGO I had discovered in California. This NGO, Sikhya, makes servers that transmit a wifi signal without being connected to the Internet. They have been revolutionizing education in India by bringing educational programs stored on this server to remote, rural villages in India. I thought that perhaps they would consider expanding their operations into Guinea. I was right.

Using my program allowance from my Fellowship, I was able to buy Sikhya’s server as well as several other devices for Jeune Espoir in Dalaba, which has been providing classes and other educational programs to rural Guineans, with a particular emphasis on educating girls and women who have never had the opportunity to go to school. It was a wonderful experience to see, first-hand, the fantastic work that Jeune Espoir is doing, and to see how much more far-reaching their programs are with the technology they have now. The best part is that everything they have is operating on solar power. The “developed” world could learn a lot from these innovative and resourceful Africans. 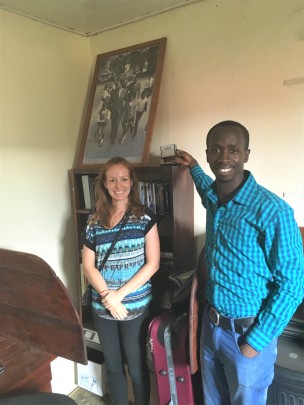 After the day trip to Dalaba, followed by the three-day workshop in Mamou, coming back to Conakry was a shock to the system. The overwhelming beauty of Guinea’s countryside, the tranquility of the Fouta, the connection one feels to nature and the sense of peace that seems to come from a spiritual realm – that is the REAL Guinea. That is the real Africa. Guinea is not only the teeming, in-your-face poverty and destitution of Conakry.

As one last experience in the “real” Guinea, I was desperate for a bathroom on the way back to Conakry from Mamou. What is normally a five- or six-hour drive turned into a 7+ hour drive when traffic (on the ONLY road) came to a standstill after a truck lost control on one of the winding mountain roads and overturned, blocking traffic in both directions. Everyone was out of their vehicles and milling around the truck. At this point, I already had to use the bathroom, but didn’t dare go on the side of the road because of all people. By the time the truck had been moved enough for traffic to bottleneck its way through, I desperately needed to go. As we continued on our way, there were too many people on the roads to stop and for me to go in the bush (the “bush” being the African wild, not an actual shrubbery).

I was going to explode. We ended up stopping at a roadside village, complete with traditional huts and wandering goats and cows. It was getting late and it was pitch-black outside. All the children of the village were gathered around a big bonfire, studying and doing their homework, as there was no electricity in the village. One of the women took me to the village’s outhouse, a hut with a small hole in the middle and a zillion large cockroaches crawling all over the place. But hey – desperate times call for desperate measures.

As I was leaving, I thanked the village women for allowing me to intrude, and they thanked me for coming. I wanted to stay. Sure, village life is not easy – especially for the women, who work from sun-up to sun-down while the men lounge about, being served by the women. But at least in the village, you can make a fire for light and for cooking, and there is plenty of land to explore and mango trees to pick fruit from. It isn’t like Conakry.

In Conakry, we are trapped in our apartment at night because it isn’t safe to go out. We are also out in the boonies and have nowhere to walk to, even if the streets here were pedestrian-friendly. When the water is off, we have to go buy bottled water, which we go through very quickly and which is not exactly cheap. When there is no electricity, we have no way to create light except using up our phones’ batteries. (We bought candles from the store once, but they haven’t restocked since then.) We are not willing to spend more than $50 (USD) a week on diesel, so we limit the use of our generator.

To top it all off, a power surge fried my laptop and phone charger, so my computer – which is only a year old – is now totally unusable, and we have to share a phone charger since mine nearly started an electrical fire.

Ouch. Welcome back to Conakry.

If anyone feels so inclined, I will most gratefully accept financial donations towards purchasing a new laptop when I return States-side….